Paths are used to mark the corridors and other walkways that visitors are encouraged to use. These will be the routes that Proximi.io algorithm uses to calculate the fastest path from the visitor's position to the location they want to navigate to. The easiest way to keep visitors away from a specific area, is simply not to draw routes there.

Adding paths is extremely simple. Just select the path tool and click away (left-click). Paths can also have angles - just keep clicking forward after the second click you made. To finish a path, do a right-click or click again the previous node you added (the white little ball).

Pay attention to the path crossings. Make sure that the paths are crossing each other, but it's not necessary to exaggerate the crossing as much as in our GIF above 😃. Just make sure there is a tiny overlap.

It is recommended to keep paths relatively short an unwinding. If your setup consists of very long winding paths, and you encounter that you need to adjust the path you will cause a lot of more work for yourself. For example, if you want to turn one part of that long path inaccessible, you will need to redo the entire path and break it into smaller segments in order to adjust just one segment of in inaccessible.

It is not necessary to add a connecting path from the corridor to each Point of Interest. These "tails" can be actually confusing in the navigation instructions. Look at the example below. The corridor in the middle is enough for most of the POIs, as our algorithm will automatically generate the missing path from the closest spot on the corridor to the POI. There is an exception, a WC marked with the red arrow. This toilet is actually accessed through the adjoining room (titled Classroom). By adding the path all the way to the POI the algorithm knows that there is no direct access from the corridor to there. 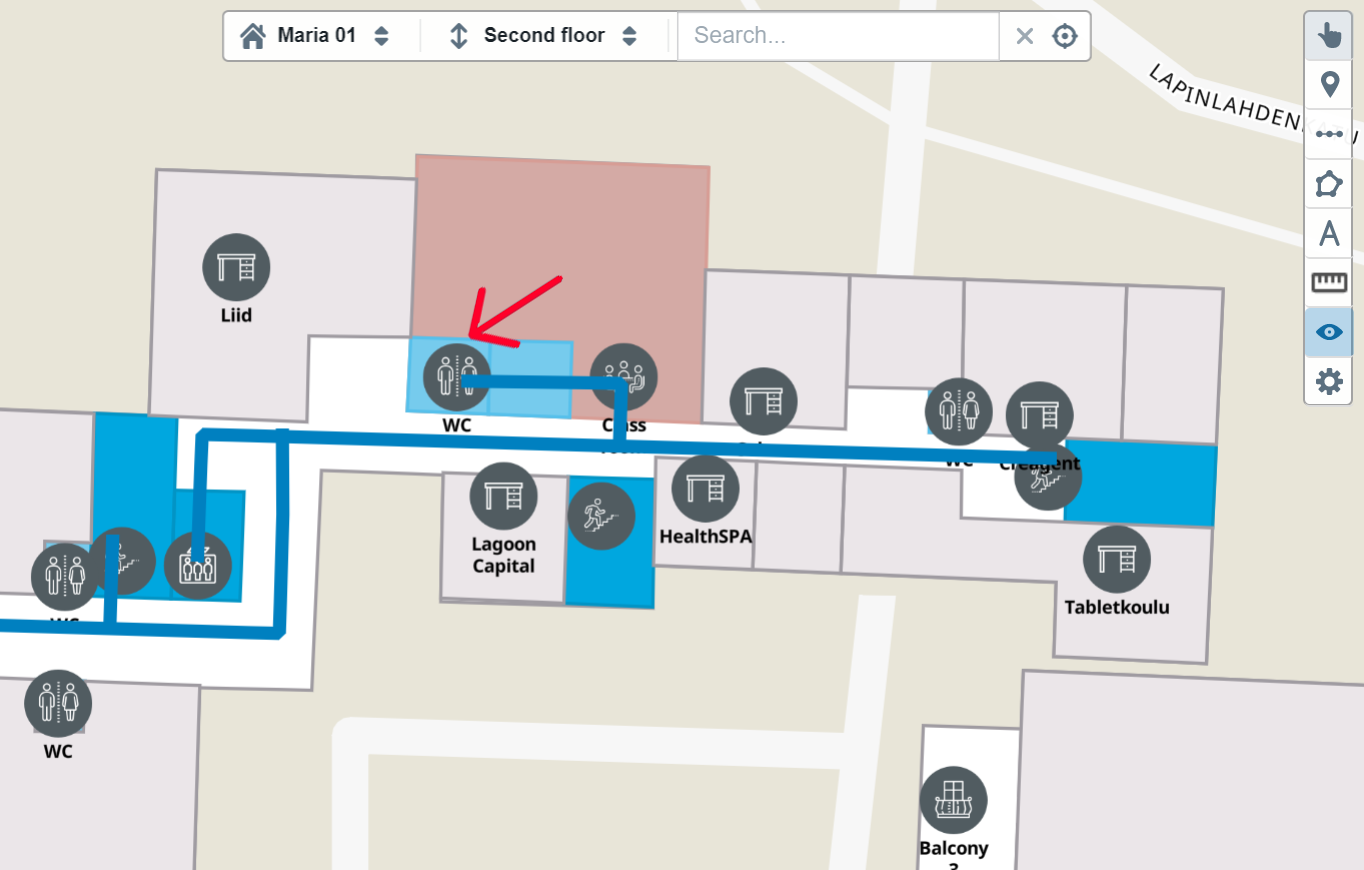 If you routing is not working as expected on your mobile or web application, check where the mistake appears to be and zoom into that area in the web portal.

Common issue #1:  your paths are not properly crossing at crossroads. It is better to even exaggerate the crossing a bit that leave a tiny gap between paths. Our algorithm assumes that a gap means that the two routes are not connected.

Common issue #2: You have tried to link two parallel paths into each other in this manner:

Editing and deleting paths is very simple. Just choose the "Select tool" from the right-hand menu, and click on the item you want to edit. You can adjust either end of the path, create additional vertices to adjust the centre of the route or move the entire route.

It is very simple to connect multiple buildings on Proximi.io. You can simply draw paths outdoors connecting the different buildings. Make sure to draw the routes all the way inside the buildings. 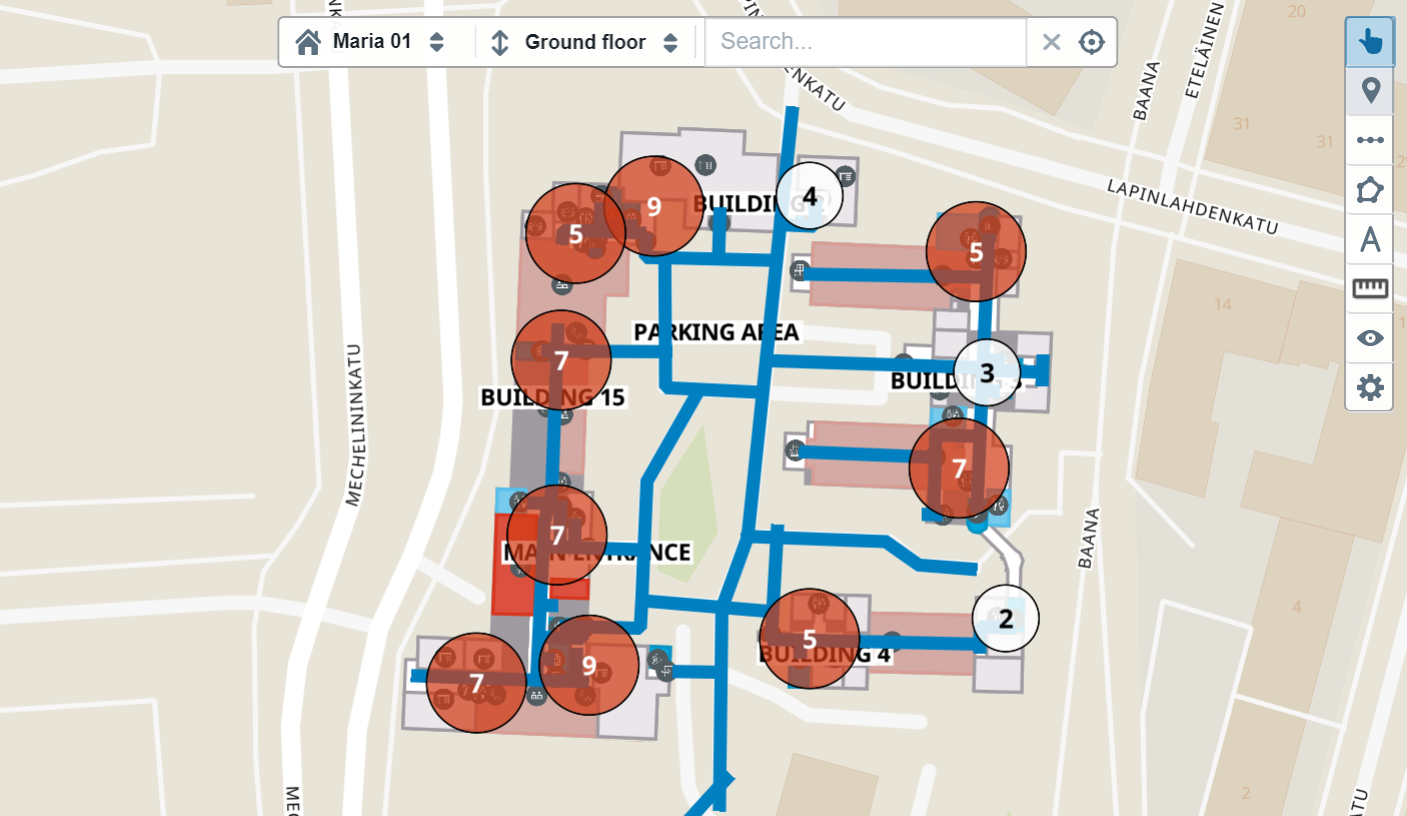 Tip: Add an entrance at the outdoors of each building. Entrances are mentioned in the navigation instructions, when a route goes through one.

Tip: You can also add paths around the buildings, if you want to connect for example public transport stops to your navigation setup.

In addition to paths, it is also possible to create routable polygons. These are meant for areas, where people can walk to multiple different directions, and creating all of these possible connections would end up creating a messy network. The areas are typically large hallways at building entrance.

To create a routable polygon, just select the polygon tool and click around the area that you want to define (left-click). To finish creating a polygon, do a right-click or click again the first corner of the polygon you defined. Remember to toggle "routable" on from the polygon's settings. You can disable "segment", unless that is relevant for your project. 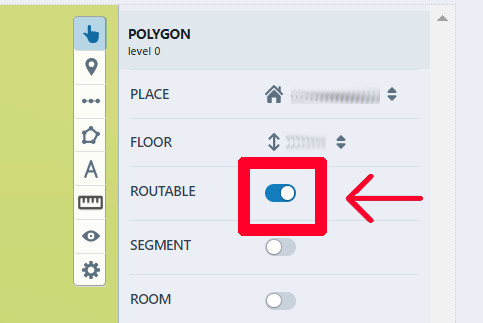 When you have routable areas and paths linking to each other, remember to overlap them. That lets our algorithm know that there is a connection between those 2. On the picture below, on the left the path and routable area are not connected. Drag the routable area on top of the path to link them properly.

Note: Only use polygons in large open areas. You cannot cover the entire building with routable polygons. There should be just 1-2 areas of routable polygons per floor. Contact Proximi.io support team, if you feel like your venue would require more polygons.

Did this answer your question? Thanks for the feedback There was a problem submitting your feedback. Please try again later.